Statue of Unity : An example of excellent Structural Engineering

Statue of Unity is the world’s tallest statue honoring the ‘Iron Man of India’, Sardar Vallabhbhai Patel. The 182-meter tall statue is an excellent example of structural engineering and steel detailing. It is a colossal building facing the Sardar Sarovar Dam on the Narmada river. This iron and steel statue is listed among the world’s 49 most outstanding projects by the Institution of Structural Engineers (IstructE).

Statue of unity was Rs 2,989 crore project, which used a huge amount of raw material including :

Statue of Unity has three layers. The innermost layer has two towers made of reinforced cement concrete. The towers have risen to the chest area. The steel frames are made on the concrete towers that form the second layer. The bronze panel cladding is the outer most and the third layer of the statue.

The exterior of the statue is made of bronze panels. These panels are called micro-panels. Micro panels are supported by structural steel scaffoldings that are hung from the internal twin concrete cores. Micro panels are first assembled on the ground to form a complete ring. If everything is approved than micro panels are lifted one by one for the final placement and installation. 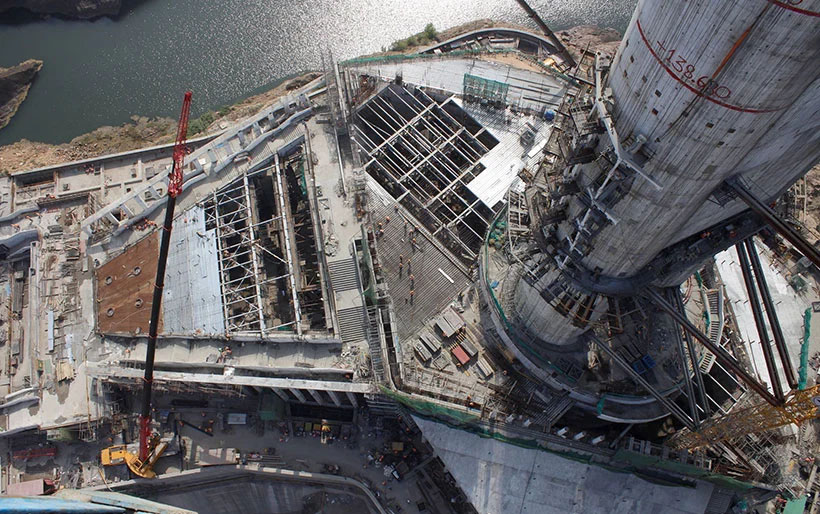 During the structural designing of 182- meter tall statue, engineers solved many challenges. From structural design analysis, load designing and selecting the right material for the construction, all the hurdles needed deep research and innovative thinking. Structural engineering and architectural designing skills were combined to design and build the statue. The latest facade and material designing techniques were implemented by experts.

Here are some challenges that were solved during the construction of the Statue of Unity :

A high raised building a constructed on the strong and wide base. But the statue of unity does not stand on a wide base. It is thick and heavy on the top and thin at the bottom. To bring stability in the building the slenderness ratio between the width and height of the statue is changed to 16:19. This ratio is significantly higher than the common 8:14 ratio which is applied in the construction of the high raised buildings.

Statue of Unity is built on Shadu Bet island in the middle of the Narmada river. The statue has to withstand the high-speed wind and chances of an earthquake. To deal with this situation the bronze cladding is made in the overlapping form, which lets it move in the vertical and horizontal direction. The Statue of unity can face the earthquakes of up to 6.5-magnitude and wind of up to 290 kmph.

Despite all these challenges, the Statue of Unity was build in just 33 months, unlike china’s Spring Temple Buddha which took 11 years to complete. Statue of Unity is a wonder of structural engineering and steel detailing.